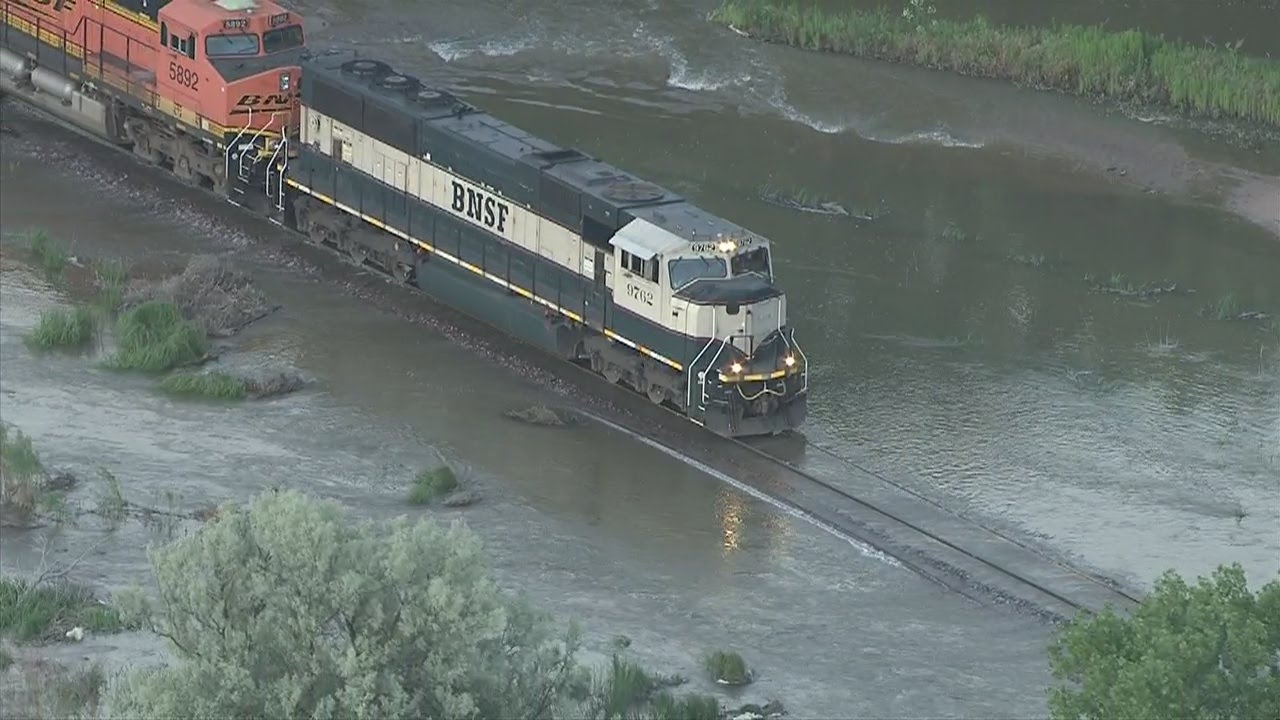 OMAHA (DTN) — While historic floodwaters that ravaged northeast and north-central Nebraska and parts of Iowa are receding, agricultural operations continue to struggle to return to normal.

Ethanol plants and feedlots, in particular, continue to have trouble shipping ethanol and sourcing feedstocks, as many rail lines across the region continue to be down and highways in shambles.

Tom Feller, president and CEO of Feller and Company Cattle Feeder that operates along the Elkhorn River in Wisner, Nebraska, said his feedlots are battling higher transportation costs as they work to repair a key roadway into their property.

“Our bridge road south of Wisner is out,” he said. “South of Wisner is home to about 70,000 cattle. We have cattle on both sides of the Elkhorn River, which causes us added expense of $500 per day to go 22 miles around through Pilger with feed.

“All our employees’ drive time is greater also. We do have a back road out of our feedlot, so we are bringing corn, hay, etc. in a back driveway. We are hauling the dirt into the bridge approaches from the feedlot, so hopefully this week we can get bridge open and back to normal,” he said.

Mike Drinnin, owner and manager of Drinnin Feedlots Inc. in Columbus and Drinnin West Cattle Company in Palmer, said damaged highways into Columbus continue to cause problems for his operation.

“To ship cattle from our Palmer yard to Cargill (Schuyler, Nebraska) adds at least $250 per load to delivery costs,” he said.

“Byproduct that we normally source out of ADM (Archer Daniels Midland) Columbus has to come out of Aurora, (Nebraska), and with the extra miles to get to Columbus, adds at least $15 per ton to the cost delivered. Rail lines need to be fixed west of Columbus, and Highway 30 from west into Columbus needs to have extensive repair.”

The Nebraska Department of Transportation and the railroad have been “working day and night to get things moving,” Drinnin said.

J.P. Rhea, feedyard manager for Rhea Cattle Company in Arlington, said with the ADM Columbus and other ethanol plants down in the area, his operation has had difficulty sourcing distillers grain.

ADM has taken a major financial hit in the first quarter as a result of flood-related damage.

ADM said in a news statement on Monday it has sustained tens of millions of dollars in losses.

“We continue to assess the situation and utilize our transportation and operating network as much as possible to meet customer needs,” ADM said. “Taken together, we expect these severe-weather disruptions to have a negative pre-tax operating profit impact to ADM of $50 million to $60 million for the first quarter.

“In March, powerful snow and rain storms early in the month and resulting flooding and its aftereffects are affecting both carbohydrates solutions and origination operations. Rail transportation has been disrupted throughout the region; our corn processing complex in Columbus, Nebraska, was idled due to flooding and currently is running at reduced rates; and unfavorable river conditions since December are severely limiting barge transportation movements and port activities.”

According to the Nebraska Ethanol Board, infrastructure damage continues to significantly affect ethanol plants’ operations.

Five plants are dealing with major rail disruptions, the NEB said. If the plants aren’t able to ship their products out, they are forced to shut down.

“Some plants are supplementing by trucking, but it’s much more expensive and you can’t move near as much product as a railroad, or as fast to maintain full production capacity,” said Sarah Caswell, NEB executive director.

Four ethanol plants continue to run at reduced capacity as a result of power outages and lack of rail access. In addition, two plants are in scheduled maintenance this week and one is beginning maintenance next week. One additional plant is considering starting early maintenance because of disruption to rail service.

Troy Bredenkamp, executive director of Renewable Fuels Nebraska, told DTN following Nebraska Gov. Pete Ricketts’ agriculture flood roundtable in Lincoln on Monday that it may be another two to three weeks before rail service is repaired.

About 20% of the nation’s ethanol production has been affected by the flooding, he said.

“So they’re trying to look at something maybe more mid- to long-term that could help them to get over this hump to get that product out,” Bredenkamp said.

“Obviously, your only other alternative is truck, and you guys know the situation with the highway system. It’s a double whammy for them in terms of being able to move ethanol product out. Where that really becomes a problem is, obviously, you don’t want to idle a plant if you don’t have to, but also, if we’re not making ethanol, we’re not making distillers grains.”

Nebraska ethanol plants are having more acute issues in being able to meet distillers grain contract needs for feedlots.

“So we’ve actually had some plants that are out of the disaster area who have been converting their DDG production to a more-modified wet distillers just so they can make it available to the local market, and hopefully it will alleviate some of this production that’s not taking place right now because of the floods,” he said.

The ADM ethanol plant that sits along a main line in Columbus has seen its rail loop flooded.

Bredenkamp said railcars that had water above the axels will need the axels replaced.

“So now you’re talking about literally thousands of axel systems that will have to be replaced for those train cars to be able to go back into production,” he said.

“It’s kind of insult to injury. A lot of those cars are privately owned by the ethanol plants, so there’s a lot of moving parts to be able to get this thing back up and running.”

Repairs to rail lines are ongoing, he said, but railroad companies are having to do things as “efficiently as possible” as well with fewer employees.

“I think there’s been a decrease in personnel over time, it’s real hard to bring that personnel back in a time like this when you need as many people who know how to reset a rail as possible, and they’re just not around anymore,” Bredenkamp said.

“And you’ve had catastrophic conditions along the Platte River; there’s nothing holding up that rail except the two ends, and it’s a very sad situation. And until we can get that back, it’s going to be hard for us to get back to 100% power on the ethanol side. Especially at a time when ethanol is actually starting to turn a corner and get a little better price wise. It probably couldn’t have hit at a worse time for Nebraska’s ethanol plant situation.”

“We have not done a comprehensive survey,” he said, “but last word we had was that no plants in Iowa flooded. Several had to reduce run rates to align with [their] ability to source corn, which was degraded by flooded roads for farmers or flooded farmer grain storage, and to align with slower rail car return times.”

Todd Neeley can be reached at todd.neeley@dtn.com