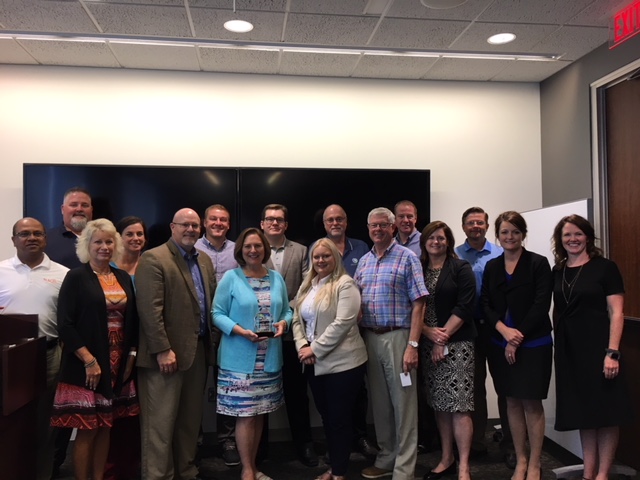 At a meeting with Nebraska ethanol producers and stakeholders from across the state, Senator Deb Fischer received recognition as a 2018 High Octane Champion, a new award given by Renewable Fuels Nebraska, the trade association for Nebraska’s ethanol industry.  The award was developed by RFN and their membership to recognize those individuals in the area of public policy that have gone above and beyond on behalf of Nebraska’s $5 billion plus ethanol industry.

“Today we recognized Senator Fischer as one of this county’s stalwart supporters of the ethanol industry,” said RFN Executive Director Troy Bredenkamp. “It remains a challenging political climate for ethanol and other biofuels.  Time and time again, Sen. Fischer has led the battle in Congress and with two different administrations on our behalf.  We wanted to recognize her for those efforts that we appreciate so much.”

The American ethanol industry remains strong, but many regulatory challenges, mostly at the hand of the US EPA, remain unresolved and the uncertainty has led to ethanol industry leaders calling for numerous changes at the agency.  With the departure of former EPA Administrator Scott Pruitt, Nebraska’s ethanol producers are hoping that many of the lingering issues, such as year-around E15 sales, can be resolved in short order, allowing the ethanol industry to take at least one substantial step forward.

“Recognizing that E15 is a way to grow ethanol’s vital importance to Nebraska and the country, Sen. Fischer introduced legislation that if passed, would resolve the RVP waiver situation and allow for uninterrupted sales of E15 year around,” said Bredenkamp. “It is support like this that our members wanted to recognize and we appreciate everything that Sen. Fischer has done, and continues to do, on behalf of Nebraska and America’s ethanol industry.”

Renewable Fuels Nebraska represents the state’s renewable fuels industry and works to foster its growth. Nebraska is the nation’s 2nd largest producer of renewable fuels, with 25 ethanol plants capable of producing over 2.2 billion gallons annually and over $5 billion of activity in Nebraska’s rural economy.  For more information, visit the Renewable Fuels Nebraska website at: http://renewablefuelsne.org/